A few players have asked me why in the Dead Simple range of RPG rules I do not use hit points or some sort of level-based increasing number of wounds.

My main reason is that I believe that such mechanics wreck roleplaying. For example, knowing they have plenty of hit points or wounds left, encourages players to have their characters engage in long, drawn out battles and ignore all the ways you could roleplay the result instead. Diplomacy, carefully planned ambushes, engaging the support of allies and even avoiding a fight altogether, all fall by the wayside when a character can take twenty, solid sword hits and keep on fighting. 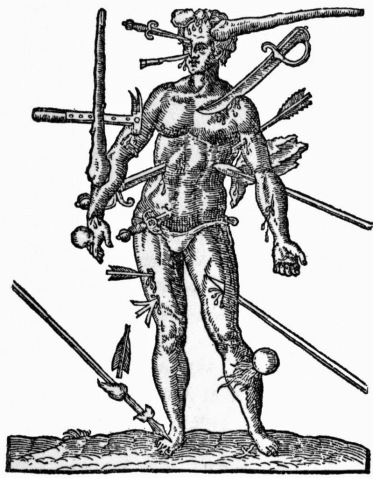 The Monk says there may be an ambush ahead!

A roleplaying game should not be reduced to being just another a skirmish wargame. A mistake TSR made with D&D 4th edition.

So the system I have designed approaches this from another direction. Characters can buy better protection, invest fate/destiny points in improving defensive skills or even rely on the use of Fate/Destiny points for re-rolls, instead of a progressive hit point/wound system. However, when you are wounded, it has consequences.

Knowing that even the toughest hombre can be killed makes players think about alternatives to just fighting everything they meet.

The incapacitated rule also adds to the opportunities for roleplaying. When was the last time your characters in any other game surrendered to prevent a wily foe from slitting the throat of an incapacitated comrade? It happens all the time in books and films, but rarely on combat-orientated RPGs.

Some people have countered my approach by saying that RPGs should be heroic. Well, what is more heroic than facing actual mortal danger, rather than wading into the fray knowing you are pretty much invulnerable?

On a practical note it certainly reduces book-keeping. When I play with my friends we just put red beads behind a figure that is wounded, until they are incapacitated when we lie the figure down. This also helps to remind players and the GM what negative modifiers to apply to the figures actions.

For those who need to know these things: - I'll never see 50 again. - I'm tall enough to see well in crowds and fat enough to leave a wake. - I'm well married to a woman with twice my smarts, three delightful and challenging children (er-hem), and one cat overlord. - I am Welsh. - I have to work for a living, but do nothing that makes me perspire.
View all posts by Craig →
This entry was posted in Dead Simple RPG, Uncategorized. Bookmark the permalink.